Chandigarh Administration wants to make the city clean, green and also want to check on the increasing pollution that is raising due to the increasing number of the vehicles. Under smart city project they have decided to include the electric buses in Chandigarh and for this, they also introduced an electric bus to the city’s road for trial bases. 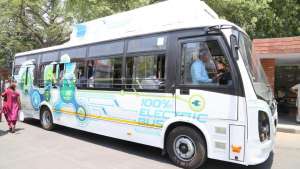 Negatives Of The Chandigarh Electric Bus:

After this trial, the 11-member inspection committee has noted some shortcomings in the electrical bus that was on the road for two-week long trial. After making the report of all the shortcomings officials of CTU on Wednesday in a meeting with the representatives of the manufacturer asked them to remove the defects. Some Problems with the electric bus are:

Positives Of The Bus:

There are also some positives that are included in the reports and that is the Zero emission and a running cost is Rs 5 for each km. The CTU’s main objective to go for electric buses is to reduce pollution. The administration has handed over the shortcomings to the manufacturer and asked them to remove all of them and after that, there will be another trial to check it.