CHENNAI: Chief Minister of Tamil Nadu, leader to many Tamils and ‘Amma’ to millions, J Jayalalithaa died on Monday after undergoing treatment at Apollo Hospitals in Chennai for 73 days. She was 68.

Jayalalithaa , who was admitted to hospital on September 22 with complaints of fever and dehydration, suffered a cardiac arrest on Sunday evening. On Monday, Jayalalithaa continued to be very critical and was on extracorporeal membrane oxygenation (ECMO) and life support systems. And Jayalalithaa died at 11.30pm.

“On this basis honorable chief minister Jayalalithaa was shifted from the advanced critical care unit to the high dependency unit where her health and vitals continued to improve under the close monitoring by our expert panel of specialists.”

“Every member of the Apollo Hospitals family, the clinicians, the nursing and paramedical staff have strived hard to provide the highest standards of care to our beloved chief minister. We have worked tirelessly combining the might of the clinical and technological resources at our command with the spirit of healing and compassion that inspires us. We join the nation and the people of Tamil Nadu in deep
ly mourning her loss,” it said.

Born on February 24, 1948, Jayalalithaa entered films when she was 16 years old. Making her debut as lead actress in a Kannada film, she was launched into Tamil films starring as the heroine in MGR’s “Ayirathil Oruvan.” Jayalalithaa and MGR acted together in 28 films, many of them super hits. She acted in more than 140 films in Tamil, Telugu, Kannada, Malayalam, Hindi and English.
Her formal entry into politics happened in 1982 when she was inducted into AIADMK by her mentor and former co-star MGR. She was given key responsibilities, including in the implementation of the landmark noon-meals scheme that taught her lessons in welfare politics. When MGR fell ill, Jayalalithaa campaigned extensively for the party that won the 1984 election.

After his death in 1987, Jayalalithaa took charge of the party and became chief minister in 1991. Since then she had been chief minister for three terms, coming back to power for the fourth term in 2016.

Jayalalithaa’s political life was marred by corruption allegations. She was convicted in four corruption cases and had to step down from chief minister twice but higher courts acquitted her and she was able to come back to power. 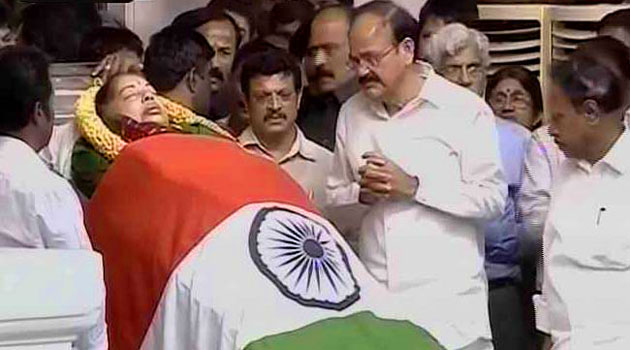 Her funeral will take place at Chennai’s Marina Beach at 4.30pm, close to the memorial of her mentor MG Ramachandran or MGR, her former co-star in films.

May Her Soul Rest In Peace!

Chandigarh MC elections 2021: Everything You Need to Know About Date, Time, Schedule, Results