On June 12 that is the 2nd death anniversary day of the Nek Chand, VP Singh Badnore, Administrator, UT, will inaugurate Rag Dolls Village on that day. This will be the tribute to the curator of Chandigarh’s famous Rock Garden because it was his dream project. 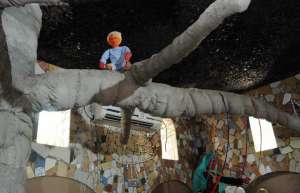 According to the Anuj Saini, son of Nek Chand his father made many dolls from the unused clothes that he collected from the tailors and these dolls would be displayed in this Rag Dolls Village. This village will show the glimpse of rural life and make it more attractive for all the tourists.

New Things That Would Be Included:

Rock Garden is a world famous tourist place. A large number of internationals tourists visits the garden every day. Two new projects will be a tribute to the legendary, Nek Chand, whose second death anniversary is on June 12.

Nek Chand who always believed that we can get best out of waste and he follow this till the end of his life. He used all the waste things and made beautiful Rock Garden with his hard work. This Rock garden is famous worldwide and even international tourist appreciate his work. To give him Tribute Chandigarh Administration is decided a day of his second Death Anniversary that is on 12 June.