Some Interesting Facts About The Fish That You Should Read

The earliest organisms that can be classified as fish first appeared during the Cambrian period. On today’s read, we are going to share some interesting facts about fish with you all. 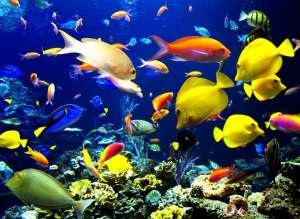 #Most fish reproduce by laying eggs, though some fish, such as great white sharks, give birth to live babies called pups.

#You always heard that fishes can not live without water but there are a fish named lungfish can live out of water for several years. A lungfish has both gills and a lung.

#Fish like a shark can raise their body temperature to grab their prey in the cold water.

#Fish do not have vocal chords but they make different low-pitched sounds to convey messages to each other like moan, croak and grunt with the help of vibrating muscles against their swim bladder.

#Special hairs in the pores sense changes in water pressure from the movements of other fish or predators.

#Starfish don’t have a brain or blood.

#Electric eels can produce enough electricity to kill a horse.

#Fishes do not have eyelids but sharks are the exceptions.

#The fastest fish is the sailfish. It can swim as fast as a car travels on the highway.

#Fish have been on the earth for more than 450 million years.

#Most fish have taste buds all over their body.

#Jellyfish have no backbones so are not fish. All fish are vertebrate. Seahorses are fish.

#A fish does not add new scales as it grows but its scales increase in size. A fish’s age may be estimated from growth rings on its scales.