Interesting Facts About Crocodiles: Know “Why Crying Crocodile” Tears Is So Famous

Crocodiles spiky skin and their sharp teeth always frightened us. But many of us are still very much fascinated to know about crocodiles. Once in the history, these crocodiles were top in the food chains but now they are replaced by human beings and today we are here to tell you some interesting facts about this feared carnivore. 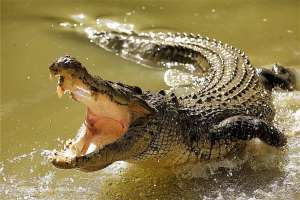 #Crocodiles are really ancient and their existence on the earth from at least 240 million years. They actually coexisted with dinosaurs. They can live up to 80 years.

#Crocodiles with the help of their powerful tail can swim around 25mph.

#Crocodiles has 24 teeth in each jaw but they do not chew with the help of these teeth. They only use it to grasp and tear apart their prey.

#Crocodiles eat rock! yes its true, they swallow stones and reason behind this are the digestion of food they eat. These stones help them to grind food inside the stomach.

#These stones also increase their weight and this helps them to submerged inside water.

# Many times you seen crocodiles sit on river banks with their mouths opens, it’s not aggression. They’re trying to cool off by opening their mouth because these crocodiles sweat through their mouth.

#Crocodile skin is considered one of the finest and best, being soft and durable. In many tribal societies, skin crocodile is used as a symbol of high status. But only the skin on the belly has these qualities; the back skin is covered in bones (called osteoderms) that reflects arrows, spears and even bullets!

#”Crying crocodile tears” – displaying fake sadness – comes from the myth that the reptiles weep when eating humans. They do wipe their eyes when feeding, and reason behind this is their eyes bubble and froth when they eat something.

#These crocodiles’ eyes which have a layer called tapetum behind their retina, containing crystals that reflect light and make possible the night vision. If you turn on a lantern at night in waters populated by crocodiles, you will see pairs of shiny red dots and these will be their eyes.