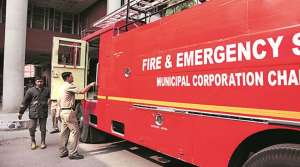 To control Fire broke out MC has decided to build new fire stations in Chandigarh and this announcement of building fire stations was made at a recent meeting of the Fire and Emergency Department by the MC Chandigarh Mayor. In the meeting, Fire Committee Chairman of the Chandigarh Municipal Corporation, Joint Commissioner-cum-Chief Fire Officer, the station fire officers as well as the sub-fire officers was there. Asha Jaswal who is the Mayor of Chandigarh said in the meeting that two new fire stations will be constructed soon to help the people in any emergency. She added these new stations will be built in IT Park and in Sector 53.

This decision is taken after noticing the major fire broke in Chandigarh and because of that MC has decided that there should be more fire stations in the city for easy availability to people. Recently we heard about the fire broke out in Chandigarh Sector 17 in Punjab Finacial Corporation and many other cases also came in limelight. To control these fire broke outs MC has come up with this decision.