Vehicles are increasing day by day and with that traffic violation is also increasing. Crossing the red light, not wearing seat belts, over speeding, using a mobile phone while driving, and driving the vehicle on a high beam are the commonly committed traffic violations on city roads. To control these things Mohali Police decided to follow the pattern of Chandigarh by starting Traffic Marshal System In Mohali. 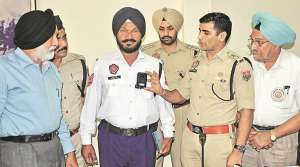 Also, body cameras will be fitted in the uniforms of traffic police personnel at the nakas to enable them to film offenders who would be issued challans. Firstly this will be done on the basis of the pilot project.

How Would This Project Be Beneficial For Controlling Violations:

According to the Mohali senior superintendent of police Kuldeep Singh Chahal, this would firstly start on the basis of piolet project and after its results, it would be started in the entire city. He also said that Traffic Marshal System In Mohali will be very helpful to control the traffic violations.

Body camera will fit on the uniform of traffic police personnel and these cameras will check all the traffic violations. It will check activities of Traffic police officer and offenders closely. Initially, the body cams have been given to traffic police officers in Mohali and Zirakpur and it would be expanded in the future. This system would help to bring transparency in traffic challan process and this leads to less corruption. Bribes that Traffic Police accept would be controlled. For people who drink and drive to inspect them Police would be provided Alco meters.