AN 87-YEAR-OLD vegetable seller, Sukh Lal, was murdered inside the premises of Manimajra Police Station and this happened after the conflict between two parties at a local sabzi mandi on Sunday night. These both sabzi walas were going to lodge the complaint against each other in Manimajra Police station. But before this accused Vijay Kumar hit the victim, who fell to the ground and suffered severe head injuries. This led to his death. 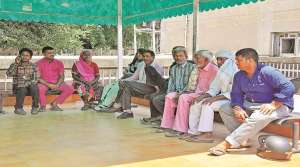 What Was The Reason Of Conflict:

The victim, Sukh Lal, was a resident of Indira Colony and ran his stall of vegetables at a local vegetable market near Bank Colony in Manimajra. According to Police on the day of the fight, victim Sukh Lal along with his younger brother, Chatterpal, was drinking alcohol at the sabzi mandi and Vijay was also there with his watermelon stall and when he saw both of them drinking, he raised an objection and addressed both the brothers in an abusive language. After this, it triggered heated arguments between Vijay and the two brothers, and a scuffle broke out between Sukh Lal and Vijay. Rajinder, son of victim Sukh Lal, said then they both parties went to lodge a complaint to the police station and when they entered Police station Vijay, who was accompanied by his family members, hit victims head on the chest of my father. My father’s head hit against a wall inside the police station and he became unconscious.

Complaint Is Registered Against The Accused:

According to the Inspector Harminderjit Singh, these both the parties were coming to the police station for lodging a complaint against each other. They were about to enter the police station when accused Vijay hit his head on the chest of 87-year-old Sukh Lal, who fell on the ground and his head hit the road. After this incident victim immediately rushed to Civil Hospital, Manimajra, where doctors declared him brought dead.

As this incident of murder took place in the premises of Police station so police arrested accused person from there. A post-mortem examination on the body was conducted by doctors at GMSH, Sector 16. Accused Vijay was produced in a local court and sent to judicial custody. A case of murder was registered at the Manimajra police station.