An act of brutality came in limelight in Nandiali village of Mohali. This village is located near the Airport Road. From last few months, people are suffering from stray dog menace in Mohali. Dogs can not understand what is wrong and what is right. But sometimes Human beings act like animals and commit some insane act of brutality. At Mohali, almost 30 dogs are attacked by some men with sticks and acid. 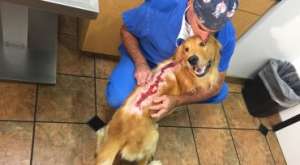 These dogs were not bothering them and they were inside their shelter. These men attacked dogs and injured them.

A woman named Resham Dhaliwal ran a shelter home in Mohali on rent and her shelter is certified by the protection and care for animals (PACFA). According to that women house owner wanted her to vacate the rented space and because of that they had fight. After this four men including house owner’s servent that were drunk came to her place and badly beaten up the dogs and attacked them with acid. She also blamed that her some dogs are missing from the shelter. Women was also attacked by those four men and one dog has been killed in the incident.

Why Police Is Neglecting This Case:

Resham Dhaliwal give shelter to stray dogs as well as owned dogs and in this incident her dogs got injury. After the incident she has lodged the complaint in Sohana, Mohali, but police is not taking any action against the accused. According to the police they cant take any action because they don’t have any proof and police has belief that the incident could be the result of dispute.