Top Headlines of the Day

The Chandigarh health department on Monday slashed the rates of Covid-19 testing at private laboratories by 25%.

For the test by real-time polymerase chain reaction (RT-PCR) method, the labs will charge ₹900 instead of ₹1,200. For rapid antigen tests, the rates have been fixed at ₹500, down from ₹650. The Haryana government had recently fixed the same rates.

Five people succumbed to Covid-19 while 293 tested positive for the virus in the Tricity on Monday.

At 158, Mohali recorded the maximum cases, followed by 98 in Chandigarh and 37 in Panchkula. Chandigarh witnessed three deaths, while a patient each died in the two neighboring districts.

3. Chandigarh may get relief from the cold for 3 days

In the wake of the spurt in Covid-19 cases in the Mohali district, the attendance of students in government schools has gone down by more than 50 percent.

According to information, about 25 to 28 students were present in a class daily in government schools. After the increase in Covid-19 cases, this number has gone down to 10 to 12 students.

They hoped that the number of students in the school would increase in another few days after coronavirus cases declined, a female teacher said.

The school was also holding online classes for students, who preferred to stay home, she said. They were allowing students to attend classes only after getting due permission from their parents, she added.

As the protesters in Punjab have lifted their rail blockade, the Railways has restored four pairs of clone special trains originating from or having a halt in Chandigarh.

However, the New Delhi-Kalka Shatabdi train would remain canceled until further orders due to low occupancy. 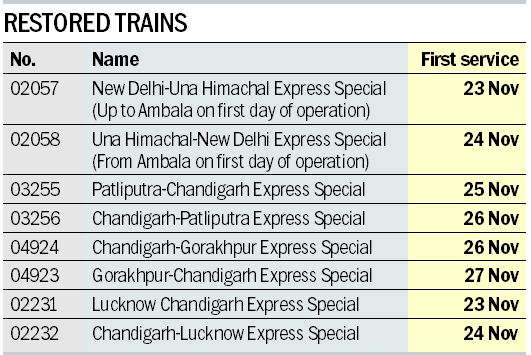 “We have been reviewing whether to restore or not the New Delhi-Kalka Shatabdi on a weekly basis. The AC train will be restored if its bookings go up,” he said.

The second draw for allotments of flats to eligible applicants under the Affordable Rental Housing Complex (ARHC) Scheme will be made through computerized draws for 448 flats on November 25 at 11 am.

The Chandigarh administration has decided to relocate the residents of Prefab shelters in Sectors 52 and 56 to EWS flats at Maloya-I.

7. Shipping of grains out of Punjab godowns starts today

With the railways resuming freight and passenger services in Punjab after nearly a two-month hiatus, the authorities concerned will start shipping foodgrains in goods trains from the godowns to other states.

At least 35 rakes (freight trains) are likely to reach various storage points to transport at least 1 lakh tonne wheat and paddy on the first day, it is learned.

8. Infections stabilize after a three-week spike in Haryana

The coronavirus infection spread in Haryana seems to be stabilizing after a big surge for three consecutive weeks, health officials said.

Health department data showed that 17,426 fresh infections were reported from across the state last week (November 16-22) as compared to 17,070 the week before, a small increase of 356 cases.

An all-time high of 17,616 infections was reported in the second week of September. The cases had started declining after that but picked up again during October’s end.

The UT urban planning department will take a final call soon on the revised plans submitted to it by the marketing committee for the new grain, vegetable, and fruit market in Sector 39.

The committee modified the plan and drawings prepared by a consultant to ensure that the new market did not have the same bottlenecks as the old grain and vegetable market in Sector 26.

Funds will be allocated for the market once all plans are finalized.

Having failed to run gyms in community centers for years, the Chandigarh municipal corporation is now all set to rope in private firms to operate and maintain these facilities across the city.

Under this public-private partnership (PPP) plan, “the gyms will be run more professionally, while at the same time, the civic body can generate additional revenue,” said MC commissioner KK Yadav, adding that the firm will operate and maintain the facility and share revenue with the MC on pre-decided terms

At present, there is no uniform policy for running the gyms. In some community centers, the executive committees of area residents have been formed for the purpose, while other ones are without such committees.

Not many students showed up on Monday as some city colleges reopened for final year classes for the first time after the Covid-19 lockdown.

Some institutes were expected to open after sanitization processes were complete in accordance with safety protocols.

The higher education department last week took a call on reopening the colleges from November 23 for final-year students of undergraduate and postgraduate courses for academic and placement purposes.

However, online classes of all the batches will continue