Famous Onscreen Mother, actor Reema Lagoo died at the age of 59 because of cardiac arrest in the early hours on Thursday at the Kokilaben Dhirubhai Ambani Hospital. Presently, she was playing Dayawanti Mehta in Namakaran on Channel Star plus. She was also known as the onscreen mother of Salman Khan in movies like Maine Pyaar Kiya, Hum Saath Saath Hain. Many costars of her reacted to the sad news and also showed their grief on twitter after her sudden demise. 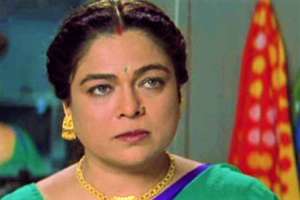 Reema Lagoo was born as Gurinder Bhadbhade in 1958 and her mother was famous Marathi actress. She also chose acting as her career and began her acting in Marathi theater. After that, she went on to play supporting roles, mostly that of a mother of the lead characters. Lagoo has also worked with most of the famous celebrities in Bollywood like Shah Rukh Khan, Salman Khan, Aamir Khan, Saif Ali Khan, Sanjay Dutt, Ajay Devgn was among the many others to whom she played a mother on screen. In her career spanning 38 years, she has worked in a number of TV serials and Movies. Her famous TV shows were Tu Tu Main Main, Shrimaan Shrimati and these shows would have been incomplete without her presence. Presently, she was working in the show Naamkaran that aired on Star Plus in a negative role.

She got married to Marathi actor Vivek Lagoo and the couple separated a few years later. They have a daughter named Mrunmayee who is also a stage and film actress as well as the theater director.

After her death, Lagoo’s son-in-law Vinay Waikul said that she was complaining of chest pain so they took her to the hospital around 1 AM. She passed away due to a heart attack around 3.15 AM. She was perfectly fine and had no health issues. It is really shocking to everyone that she is no more. Many Bollywood actors showed their sadness because of her sudden death.

Neha Pathania
Previous articleKnow About The Medicinal Values & Health Benefits Of Official Flower Of Chandigarh
Next articleChandigarh Going To Get More Greener With 40,000 Trees And Shrubs