Bars And Microbreweries In Chandigarh From Sector 26, Will Be Relocated To New Place

From last 1.5 months, all the liquor vends, bars and microbreweries in Sector 26 in Chandigarh lost the footfalls because the supreme court ordered that there will be no liquor vends within 500 metres of national and state highways. People who are involved in Liquor businesses are facing a loss so now they came up with the decision to shift their businesses to Industrial Area, Phase 1 Chandigarh. 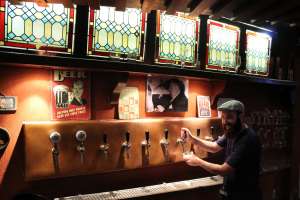 Liquor Vendors are looking this place as the alternative. Berkeley Square, City Emporium Mall, Centra Mall and Godrej Eternia will be the places where they are going to shift.

List of Places Where Bars And Microbreweries Will Be Relocated

Some of the microbreweries will be shifted to Godrej Eternia building and according to the Owner of Godrej Eternia building, he is in touch of around six microbreweries. For the shifting purpose construction of clubs will be started soon there. But the rent will be more there as compared to the rent people were paying there in sector 26. The kingdom of beer will be also moved to Godrej Eternia. The owner of the kingdom of beer was paying 6.5 lakh in sector 26 but now he has to pay more. Ministry Of Bar Exchange (MOBE) which was located in Sector 26 Chandigarh will be relocating to City Emporium Mall. With Elante mall and other hotels here already attracting a huge crowd, the hotel owners find good prospects in this belt.

Why Rates Will Be High There:

This area is attracting a large number of the crowd already because of  Elante mall and other hotels that are the reason behind the high prices of the outlets there. Another reason is a lot of enquiries from the hotel owners who are planning to relocate to Industrial Area. Due to the increasing demand, the property rates have increased from Rs 70 per square foot to Rs. 125-150 square foot. Every liquor vendor has to pay around Rs. 10 Lakh per month there.