A baby born in jet airways plane when his mother was traveling from Saudi Arabia to India on Sunday. He was born 35,000 feet above from the sea level and he also got the first gift of lifetime pass from the airline. 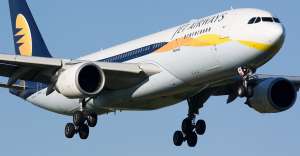 His mother was traveling from Dammam for Kochi in Jet Airways flight 9W 569 and this flight took off at 2.55 am on Sunday. But that lady traveling onboard started premature labour pain. After this to provide her proper medical treatment crew diverted the flight to Mumbai. An announcement also made to get the help but there was no doctor or nurse traveling to Kerala. After that, a person named Wilson came forward to help airline staff to deliver the baby. After the plane landed in Mumbai, both the mother and the baby were rushed to a hospital and were said to be doing well, according to the airline.

Last year, five infants were born on a commercial flight, but they don’t get the golden ticket for free travel for the rest of their lives. But the airline, Jet Airways has announced that he is the first baby that born in the flight and they are very happy to offer him a lifetime pass for rest of his life and he can travel in jet airways without any expenses. After this plane resumed the journey from Mumbai to Kochi and reached there at 12.45pm.