As the deadly winter nights are approaching, the spirits of the farmers of the Bhartiya Kisaan Union (BKU) protesting at the Singhu border of Harayan-Delhi ain’t supposed to die down. In fact, the eagerness is coming alive like a flaming bone fire in the foggy nights. Tens of thousands of farmers from the states of Punjab, Haryana, and UP are protesting against the farmer’s bill 2020. The farmers have been sitting on Dharna on the singhu border since November 27.

The past few weeks have changed the course of the lives of not only farmers but many other classes of people as well. For many of us who are visiting Singhu Border for a day to drop of donations; the whole panorama may look like a lot of fun. But indeed it is part of some serious history being written by a few thousands of farmers who have worked all their life in the Hazy fields.

Neither I belong to the family of a farmer, Nor am I a Sikh, But being a child of the Holy ground Sri Muktsar Sahib, which is part of Sikhism History, and being Punjabi by blood, I have incorporated the three pillars of Sikhism into my soul at a very early age. These pillars are “Naam Japo, Kirat Kro, Te Wand Chako” Loosely translated to as,

Naam Japo: Thank God, for what he has given us

Wandd Chakho: Always share what you have with the community, be it food, wealth, or else

These three things were seen at the Singhu Border. If someone asks me, these are pillars of not only Sikhism but humanity.

There are speeches all through the day at Singhu, the roar among the people is awe-gasping. You can spot stalls of Chai, kheer, langar. The meals at Singhu are no less than a sumptuous lunch.

Ekam: Everyone is equal

The langars are not just feeding the farmers camping at the Singhu border, But also other underprivileged people who live near the protest site. The countless homeless people of Delhi who are often ignored by the world struggled for even one square meal a day before the protest. 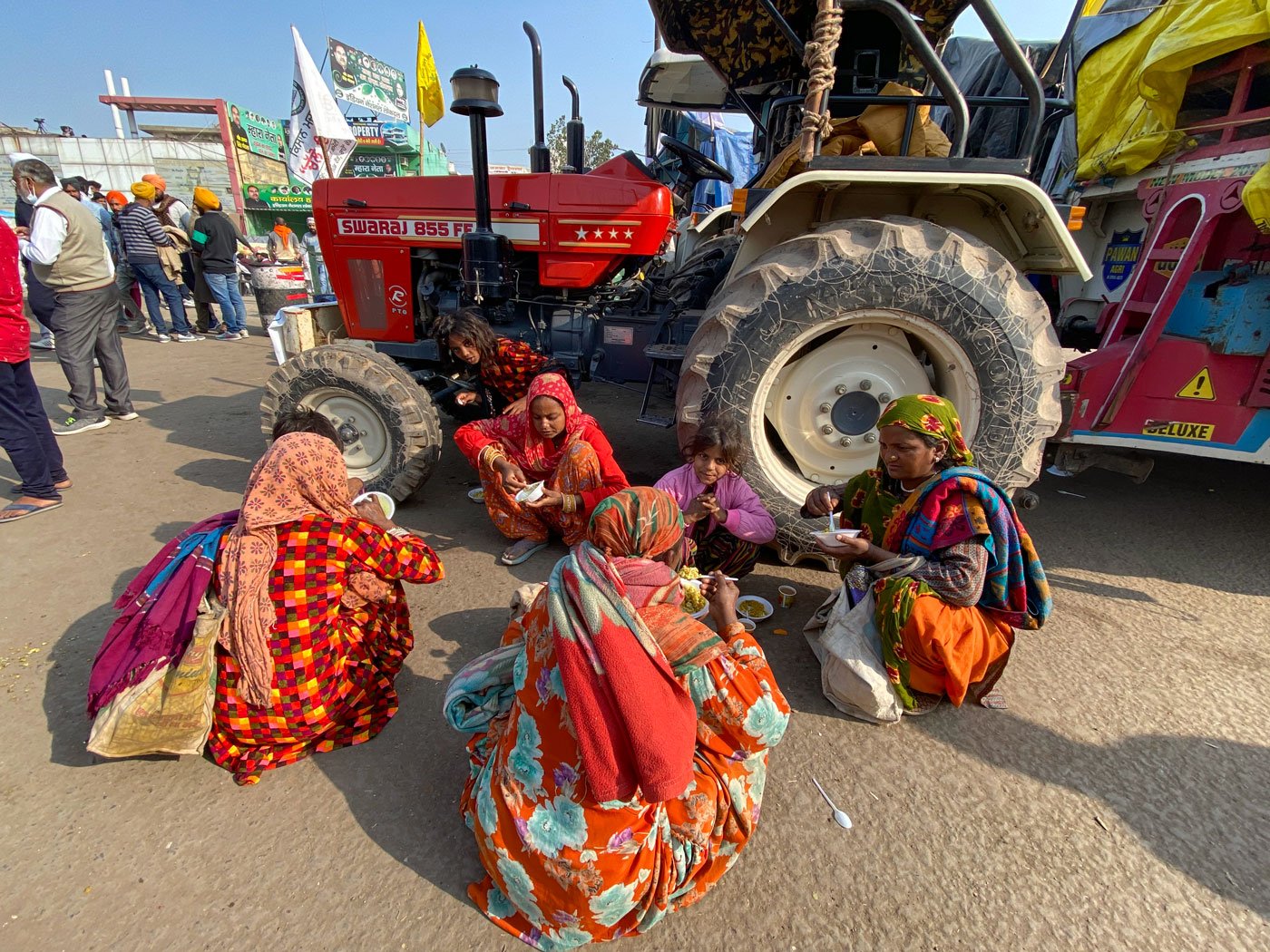 Langars at Singhu are for everybody. These feasts are especially is being enjoyed by the young outcasts rag pickers of Delhi who lived near the border. For these poor kids, there is more than enough rag to bag. The langars provide them food, they only dreamt of earlier.

From pinniyan, laddo, dry fruits to Pizza & Coke, the langars ensured nor children or adults around singhu sleeps with the growling tummy. The langars treat provides them with three meals a day and tea served with fruits, matri, biscuits, Zarda, and more. The kids are happy because they can eat as much they want, whenever they want. 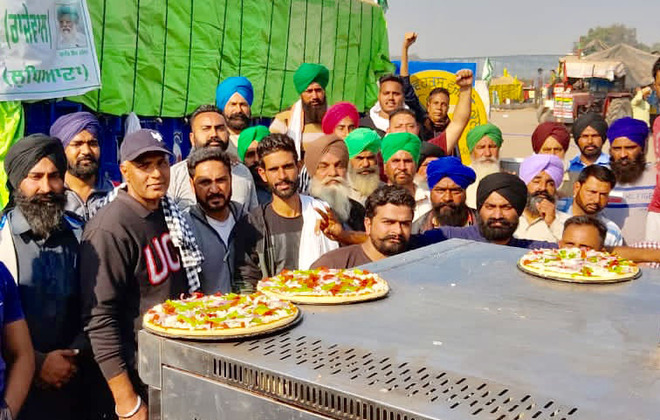 The disposed plates also ensure the livelihood of these ragpickers as they don’t have to travel far for the scarp collection.

“We live nearby only. We are very happy as we are getting to eat many things including sweets and different dishes every day. It feels like a fair and we are very happy because of this, ” said Ravi, a 12-year-old who lives near the protest site. 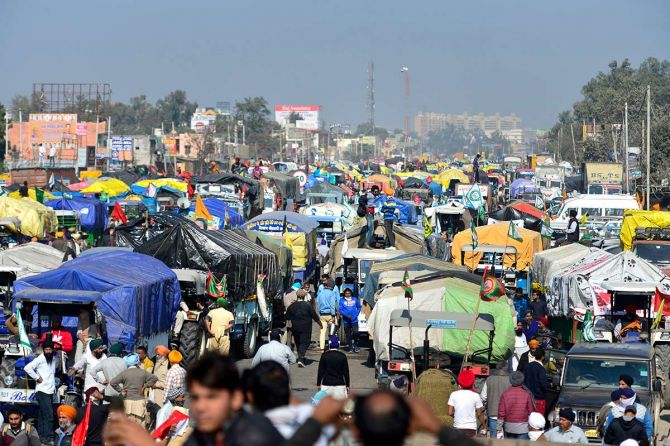 Apart from langars, the NGOs, volunteers, Activist and some of the anonymous donors from all over the nation has been contributing to the protest site so much, that one now can call Singhu border – A Caravan Carnival

Every morning, people pray. Shabad and religious rituals are a part of the routine at Life at Singhu. While some start ahead on making Chai and Pakora, others take bath and sit on Dharnas. They take turns with the kitchen duties and the screaming slogans of supporting the farmers. The speeches go on all day long, so does langars.

Also, One cannot miss the horses stationed with Nihang Sikhs. The horses forms a barricade protecting the farmers, and every once in a while they showcase their skills and tricks as well for light entertainment.

The horses are a “show of power” and often portrays the pride the Punjabi manifest. Young Teenage boys doing Gatka- ancient martial arts can also be spotted around.

Communal Harmony in the midst of the Protest

The most beautiful sight which can be seen at the protest is the langar of Zarda Pulao. Zarda is a dish associated with Muslim cultures mainly being cooked on special occasions like weddings. Zarda langar set up my Muslim community of Malerkotla is their way to show support to their Farmer brothers.

During the Partition in 1947, Malerkotla was the only district in Punjab that did not see any violence. the Muslim majority of Malerkotla opted to remain in India.

History says, when the sons of Guru Gobind Singh, Sahibzada Fateh Singh and Sahibzada Zorawar Singh, were ordered to be tortured by the governor of Sirhind, the nawab of Malerkotla, Sher Mohammed Khan, opposed the order, earning the respect, support, and blessings of the tenth Sikh guru.

Today, the newer generations are strengthening the message of Intercommunal brotherhood.

Our intention is not to glorify the activities and the amenities available at Singhu. All we want to put a spotlight on is the Community Spirit and Unity of farmers. These are a mere example of “KisaanEkta”

As of now, adulthood has taught us that nothing around us ever is one-sided. There exists a silver lining everywhere. 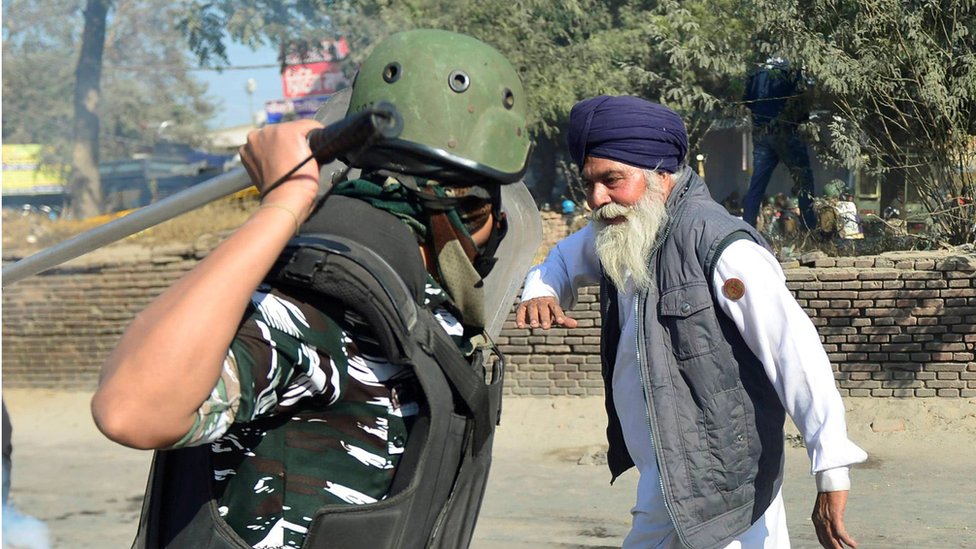 All these things mentioned above may have provided some relief to protesters, but the protest ain’t end yet. The Nation had seen the brutal batoning done to farmers by the army men.

The Caravan Carnival is an outsider’s perception, but if one may go to the farmer and ask, had they ever imagined their life turning to be here, at the empty road, under the stars within these scenarios, amidst a Pandemic? All they know now is, they are here. The Singhu border is their home until the three farm laws are withdrawn.

They are living in the Brutal and Harsh Delhi winter. They sleep on-road or under their tractors when the night temperature falls below 3 degrees. Just, picture in your head, an elderly farmer sleeping in the cold wintery night, for what? For the sake of his democratic right!!

Bear in mind, there have been deaths too. The singhu had seen 14 deaths in the two weeks. On average, one death per day.

The Nation is With You! Every day thousands of more farmers and individuals come to join the protest. Although, I prefer to use the world revolution. Actor & Singer, Diljit Dosanjh has been backing up the protest since the beginning. From Twitter war with Kangna Ranuant, to giving savage answers to the people slamming Pizza langars, he has been a constant voice of farmers on Twitter. He was not merely a twitter warrior.

He has himself experienced the life at Singhu for a day and has donated Rs. 1Cr for the cause and intention of distributing essentials to the protestors. 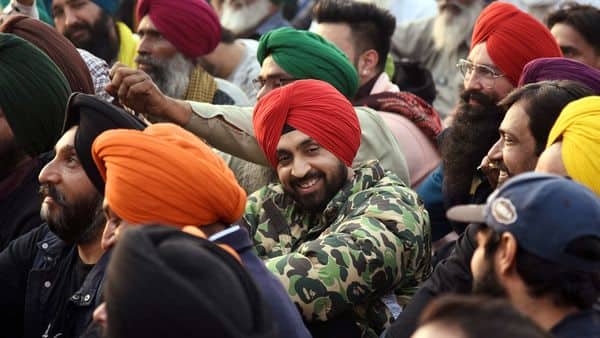 Diljit Dosanjh inspired people to stand for what you believe, Fearlessly.

Apart from him, many other Punjabi industry celebrities visited the Singhu border to show support to the farmers. Some of them are Gurdas Mann Ji, Babbu Mann Ji, Nooran Sisters, Gippy Grewal, Jassi Gill, Parmish Verma, Ranjit Bawa, Amrit Mann, Ammy Virk, and the list goes on…

Sportspersons like Boxer Vijender Singh and Cricketer Mandeep Singh– Captain of Kings XI Punjab along with many other athletes, wrestlers of Punjab and Harayana have also been part of the protest.

The famous 19-year old Melbourne based Punjabi Kudi and Spokesperson @moosejattana also have been actively participating in the protest.

9-Year old Child environmental Activist, Licypriya Kangujam from Manipur has also been staying at Singhu to be a part of the Protest.

NGOs like Khalsa Aid have been contributing a lot and helping these farmers live smoothly at the Border.

Another NGO – People Against Rapes in Inda (PARI) has been supplying the sanitary pads for the women protesters.

Most of the celebrities of Punjabi industries are from the city beautiful itself. Apart from them, Panjab University’s first women president Kanupriya joins the farmers’ protest at Singhu border.

Chandigarh Based NGO – I am still Human is constantly standing with the farmers. The founder of I am still Human, Mr. Vivek Mehra, and his team is making regular visits at the Singhu border to donate blankets, sanitary pads, masks, sanitizers, toothpaste, and other essentials.

Chandigarh based famous Hip-Hop Duo Kru172 has been camping at the Singhu border for a week. They have been updating all the insider information from the protest site on their official Twitter and Instagram handles @kru172

From sleeping under the stars to experiencing rains & storms, they have been standing with the farmers with their total-commitment. The duo is known for their one-of-kind music and has a huge fan base outside India. Recently, in the support of the protest and nationwide boycott of Reliance products as called by the BKU, they took down their music from JioSaavn.

Hailing from the family of farmers, their support, dedication, and involvement in the protest deserves an applaud.

Of course, the list of Supporters and Protesters is endless. The agitation of the protest is increasing day by day. The farmers are ready to make singhu their new home as long as it takes the government to kneel. While the government is in no mood to make some serious decisions.

Also, the Media and MLAs are just enjoying the show and trolls with popcorns in one hand and coke in the other.

Are we seriously living in the Democratic World?