Top Headlines of the Day

1. In Chandigarh, Covid deaths down 45% in October, But but doctors caution against lowering one’s guard

Deaths due to Covid-19 in the city have gone down in October by over 45 percent as compared with September, which recorded the highest number of fatalities in a month.

Although the number of deaths remained constant in the first two weeks of October, it decreased considerably in the third week. The first week recorded 18 deaths, followed by 17 deaths during the second week. Only 10 deaths were recorded in the third week of October. 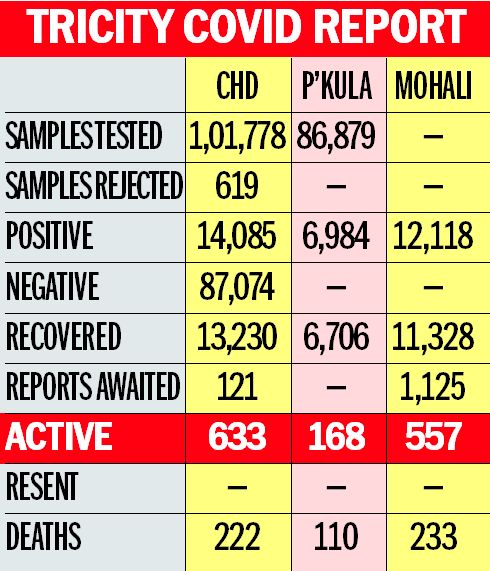 Prof R K Kochhar, head, Department of Gastroenterology and Sub-Dean PGIMER, says that Even in the case of the Spanish Flu, there were more than two waves. Also, we have to keep in mind that not even 10 percent of the population is infected so far, so 90 percent of the people are not exposed to the virus. As for the high positivity rate, we all know that Chandigarh has lagged in testing. Taking precautions and following guidelines is the only way to protect ourselves and others

2. Chandigarh schools asked to prepare own SOPs for reopening from November 2

Schools in Chandigarh have been asked to prepare their standard operating procedures (SOPs) based on the guidelines shared by the UT school education department for the reopening from November 2 onwards for classes 9 to 12.

Director of school education (DSE) Rubinderjit Singh Brar said, “Since each school has the different infrastructure, it will be easier for them to manage rather than have the same rule for all schools.”

He said the SOPs have also been sent to private schools, but it is up to them whether they want to open or not from November 2.

An online medium will continue to be the preferred mode of instruction both for private and government schools even after this. Students will have to get consent from their parents or guardians before they are allowed to come, and officials are expecting about 25% of the students of government schools to show up once physical classes resume.

3. No laser show at Chandigarh’s Sukhna Lake on Diwali

With work on the country’s first bullet train connecting Mumbai-Ahmedabad progressing, the government is focussing on other routes, including one between Delhi and Amritsar via Chandigarh.

As per documents in the public domain, the bids have to be submitted between November 3 and November 9 and will be opened the next day.

The Delhi-Chandigarh-Amritsar route is among other corridors identified for the high-speed rail network in the country for which a detailed project report would be needed.

5. Sanitation workers and garbage collectors call off strike in Chandigarh

Sanitation workers and door-to-door garbage collectors on Monday called off their indefinite strike in Chandigarh. They will resume work from Tuesday.

The strike was ended even though key objections of the unions — GPS-enabled watches to keep track of sanitation workers and takeover of door-to-door garbage collection by the municipal corporation — remained unresolved.

The councilors had a meeting with the union representatives. “After we assured them that their key demands will soon be resolved, they agreed to call off their strike,” said ex-mayor Rajesh Kalia, who is the MC sanitation committee chairman

Chandigarh based group came up with the project“ Deep-sea Sahayog Tak” in which they used discarded earthen lamps to raise money for children. Rohit, a member of the group said that they started the project in 2018 when they collected 20,000 lamps which were then recycled and sold for Rs. 50,000 in 2019.

They also engaged a self-help group, members of which helped in the cleaning and coloring of lamps. 40% of this year’s earnings will be sent to this youth for their assistance and the rest 60% will be contributed towards children’s education.

7. Chandigarh to issue bid documents privatization of the Electricity Department by November end.

To start the process of privatization of the Electricity Department, the UT Administration will issue bid documents by the end of next month.

Opposing the privatization of the department, Gopal Datt Joshi, general secretary, UT Power men Union, said it was the most profit-earning department of the UT and had never been in the red even as it does not generate power. Despite the staff shortage, the department was serving the public with the best services.