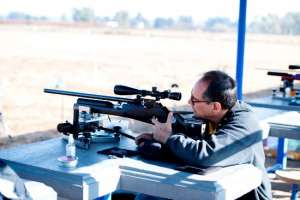 These new upgradations will help to those shooters who are getting training outside the city and they can take the training in their own city because of the addition of 300m range in shooting arena the Patiala-ki-Rao by the end of this year. In 2013, the then Governer Mr Shivraj V.Patil had announced that it will be added in this shooting arena but its construction was not done. Now full-fledged work has started on it.

This up gradation will help the budding shooters from the region to hone their skills in their own city because earlier they have to go to the Shooting Range in Kadarpur, Gurugram. Patiala-ki-Rao is the only shooting range of the city and it is situated in the sector 25. Around 3.16 crore was spent on the establishment of this shooting range and it was completed in 2013. But the government is working to make it hi-tech and modern and this will help budding shooters in getting good training here.

This would be the first 300m range in the region and second in North India – after the 300m range at CRPF Shooting Range in Kadarpur, Gurugram. The work on the wall is almost done and the process of allocating the tender for further placement of waffles is underway. This will help shooters in many ways:

Once the waffles are in place, weapon simulators will be installed in the 300m Shooting Range In Chandigarh which helps shooter in making practice easier and this will also reduce practices cost. All the efforts will be made to develop and equip this range with all the latest and modern facilities to make it one of the best shooting range in the region. Soon people will get their shooting range in Chandigarh.